Get Great Exposure for Your Videos

Great video exposure is all about light. In fact, exposure is defined as the amount of light that is allowed to hit the photo sensor in a camera. Because it applies to videos shot in all settings, exposure is one of the most important components to producing spectacular video.

When composing a shot for video or photo, there are three major tools at your disposal for adjusting exposure: aperture, shutter speed, and gain (or ISO). Aperture determines the depth of field, Shutter Speed controls blur, and Gain/ISO determines the amount of noise or grain in an image.

Each tool has the ability to make a shot brighter or dark of course, but they each go about this in a different way and cause other effects. To understand how they work together, let’s define what each element means.

In simple terms, the aperture is the opening of the lens that allows light to hit the camera sensor. The wider the opening, the more light gets in, the brighter the image.

A shallow depth of field means the subject of the image will be in focus while everything in front or behind that subject will be out of focus. Sometimes, that effect is desirable, like for portrait images. However, for scenes where you need a deep depth of field, you might need to adjust your exposure a different way.

Shutter speed determines how long an image is exposed to light.

In older film cameras, this was how quickly the shutter would open and close, exposing the film. In modern, digital cameras, it’s how long the camera sensor is powered on to capture the image. Raising the camera’s shutter speed will allow less light through, and thus darken the image.

Raising the shutter speed also reduces motion blur. This can be great – but having too little motion blur can cause your footage to look jittery and unnatural. Of course, having too much motion blur will make your image look…blurry.

Another thing to consider is that every camera sensor will have a “native ISO,” or the ISO setting at which it will capture the most dynamic range in an image (more shades of gray between white and black). It’s typically best to keep your camera at this native ISO whenever possible, and adjust the other two settings to control your exposure.

Understanding how these three settings work together is a great starting point for getting proper exposure in your images.

Of course, there are also many other things to consider, like the 180 shutter rule and neutral density filters – and that’s where Vervocity can help!

We have years of experience shooting in different environments and for different styles of footage, and can make sure every shot of your project has perfect exposure.

Shoot us a message to get started!

An Intro to Color Temperature and White Balance 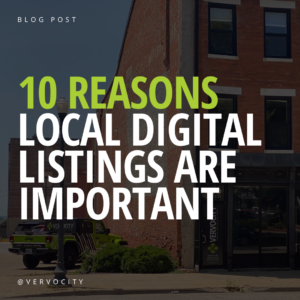 8 Reasons to Work with a Marketing Agency

Are you ready? Let's get started!

Call or email us today!